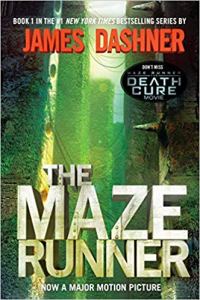 Today I’m going to review The Maze Runner by James Dashner. I’m going through my backlog of books that I’ve been listening to on audiobook and figured  I’d start here. After all, I have four hours every morning while I deliver newspapers to listen to audiobooks and I figure I may as well share what I’m reading.

When Thomas wakes up in the lift, the only thing he can remember is his name. He’s surrounded by strangers—boys whose memories are also gone.
Outside the towering stone walls that surround them is a limitless, ever-changing maze. It’s the only way out—and no one’s ever made it through alive.
Then a girl arrives. The first girl ever. And the message she delivers is terrifying.
Remember. Survive. Run.

I liked The Maze Runner. The idea is so original and the entire time I was reading I had no idea where it was going. At times the characters felt a little flat, but for the most part, they grew on me. I loved Newt and he’s probably my favorite character out of the entire series. It’s cool to see the boys work together to create their own society. I’ve never given a lot of thought as to what would happen if people were left to come up with their own system of government and running things, but this book made me think what life would be like.

I did see the movie before reading the books and I felt like the movie stayed pretty true to the books. The relationship between Thomas and Teresa annoyed me a bit. I couldn’t tell if it was insta-love, or if he was just excited to recognize they had a connection or that they were friends before, but it didn’t feel as organic as I had hoped it would.